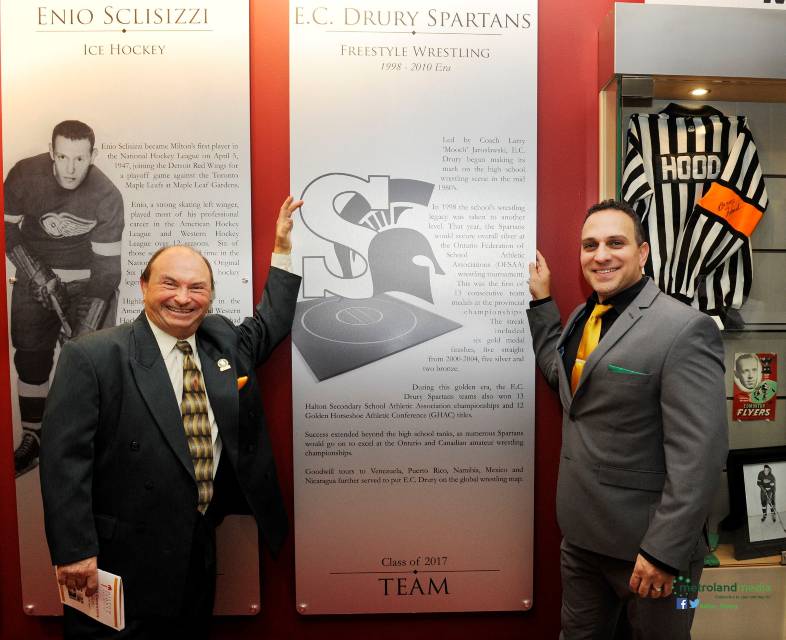 Thank you by Larry Jaroslawski

I will leave most of the talking to one of the wrestlers but first, on behalf of the team, I would like to congratulate the other inductees and thank the committee for bestowing this honour upon us. I’m not sure that all of the guys are old enough to fully appreciate what this honour means but I can guarantee you that they are all thrilled about the induction.

I would also like to thank the administration, staff and students of E.C. Drury High School for their support and encouragement over the years. It is a shame the school is no more but it is great to know it’s name will live on here on the Wall-of-Fame.

I would like to thank the parents of the boys, many of whom became regulars at our competitions and helped us to host our tournaments and with various fundraisers for our many trips abroad. Wrestling is a challenging and trying sport and it is very difficult for a wrestler to excel without the support of their parents.

We must also thank the Milton Champion for the outstanding coverage they gave us going back to Rob Kelly in the early days to Steve Leblanc and Graham during the Championship run. Not only did the Champion make the town aware of our many successes but it inspired the team and encouraged many newcomers to high school to give the sport a try.

Most of all, I must thank the many wrestlers who came before this group. From humble beginnings, it was the wrestlers of the 80’s and 90’s who created the passion, the determination and the culture that became the trademarks of Drury Wrestling. It was this group that started the long climb up the ladder that ultimately led to all the success.

Finally, congratulations to the record setting wrestlers and coaches from 1998 to 2010 for your commitment and your achievements that led to your induction into the Milton Sports Hall-of-Fame. At this time, I would ask all the wrestlers here to stand up and take a bow.

And now, to talk a bit of the experience, a wrestler who represents the passion and the dedication of a Drury Wrestler... 2001 co-captain, Rory McDonell. 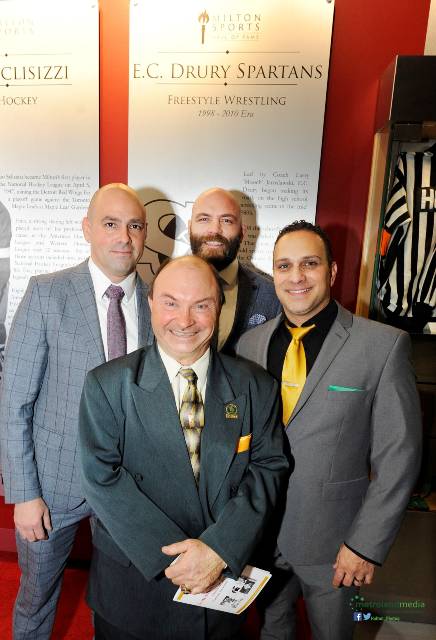 Rory's Speech at the Ceremony

Thank you for the kind introduction Mooch. My name is Rory McDonell and as Mooch said I was co-captain of the team in my final years at Drury. I was fortunate to be a part of 3 OFSAA medal teams, including two gold medals. I am deeply honoured to have been asked to speak at such an auspicious event on behalf of a team that has meant so much to me.

I've always been a fan of studying history; Thucydides said history is simply philosophy by example. I've always felt that studying history was a valuable source for ideas about how to live my life and what to do with my time here on Earth. One of my favorite things to stumble across while I'm reading is what one historian called “the razor edge of history.” This is a decisive moment, a deeply decisive moment that has the ability to drastically change history. Caesar crossing the Rubicon and ending the Roman Republic; the attack on Pearl harbour which brought the United States to bear against both Japan and Germany in WW II. These events impact how you and I live our lives right up to the modern era. I have experienced these moments in my own life as well. Razor edges where decisions I've made impacted everything that followed in my life. One of the most significant of these turning points was my decision to join the EC Drury wrestling team. I went, and I literally can't imagine what my life would be like if I hadn't.

This sense of history is something that I saw reflected in the very fabric of the wrestling team I joined. The famous Drury wrestling room was located on the top floor of the athletic building overlooking the gym. Walking up to the wrestling room I remember seeing that the entrance door was embedded in a wall covered in plaques listing every Halton, and GHAC Champion, Every OFSAA wrestler who had placed, and wrestlers who had covered themselves in glory in National and international competitions. Walking into the room itself was like walking into a functional museum. The floors were covered in mats and so were parts of the walls. There was a chin-up bar and a bank of windows overlooking the gym. Every other surface was covered with the accolades of previous generations. Newspaper articles, medals, pictures of champions astride the podium, and pictures of former captains. Emblazoned at the highest point in the room was a banner which read:

We are inspired by the victories of those who battled before us, and strive to inspire those who follow.

Even this quote itself were the words of a former captain and Drury's first OFSAA gold medalist Colin Widdis. There was an immediate sense that you were in a room dedicated to a purpose. That a great deal of work, sweat blood and tears had been shed on those mats to reach the heights attained by the previous generations. I remember, as a skinny kid catching my breath at the thought of having my name etched in some way in that room.

Standing at the center of that storied room was our fearless leader, Larry Jaroslawski (affectionately known as Mooch), with his arms crossed and a scowl on his little face. He was the engine of our success, the architect of a dynasty. Mooch struck the spark, and fanned the flames of our ambition. He is gruff, he is blunt, he looks a little like a hobbit, and he created a team that was successful for a period of 30 years, which was capped by an unprecedented run of 13 OFSAA medals, including a span of 5 years in which no program in the province, or indeed the country, could compete with the house that Mooch built.

How is it possible to take a totally individualistic sport, one in which your own personal wins or losses on the mat are generally the sum total of an athlete's involvement, how is it possible to take this lone man's sport and turn it into a team dynasty. What mooch did better than anyone I've ever met is to create a culture where everybody buys in to something bigger than themselves. Everyone on the team, everyone that wrestled for Mooch and for Drury was well aware of the history of success they were joining. Everyone was aware that our actions would be remembered and hopefully surpassed by the generations that followed us. It reminds me of the famous Greek adage: A nation grows great when men plant trees whose shade they will never live to sit under.

This well developed sense of history; both the awareness that we are all standing on the shoulders of the giants who came before us, and also that generations who follow will look to our own exploits for inspiration. This awareness had a number of positive effects on the team and how we competed and grew. The awareness that we were a part of something bigger than ourselves, that we had much to live up to and an example to set for others to follow, actually gave us strength. Not the strength to bench press the most in the gym, or to crush our opponents physically, but rather mental and emotional strength. The strength to be confident enough in ourselves to be our own men and to pursue our dreams. The strength to do the right thing even when it's hard, and maybe especially when it's hard. The strength to overcome adversity and to make a conscious choice to move towards greatness.

Over the course of our history we learned how to win and we also learned how to lead. Mooch was adamant about sharing his role as the head of the team. He set up a structure where the leadership, the teaching, the motivation were all built intrinsically into the hierarchy of the program. Senior students were captains, we planned the season with Mooch, we ran practices, we travelled to the University of Guelph to take advantage of the Olympian coach and the gifted athletes who trained there. We were lead in grade 9 by the older students, and we in turn took on leadership roles. What an important component of our success, especially in such a traditionally individualistic sport. This structure got us invested in the success of one another.