In November of 1984 the new coach Larry Jaroslawski took over the winning reigns from the original team founder Tom Mooney. The Drury wrestling team quietly climbed out of the Halton basement for the first time in history. A year later at the Halton Championships they surprised everyone but themselves by capturing the team silver medal. Just a day before, the Milton Champion Newspaper ran their first feature story on the team. The story was titled "One Step From a Dynasty" and opened with "A single journey begins with a single step". Well here it is, the new Millennium, the dynasty has been made and thousands of steps have been taken. By the year 2000 the Drury dynasty was as strong as ever as the Spartans became the dominant team in not only Halton and GHAC but in all of Ontario.

The early glory began when Thomas Jensen became Drury's first ever Halton Champion. Jensen's first gold medal came at the Erindale Novice Tournament in November of 1984. Before the year was over he was not only a Halton Champ but also placed 9th at OFSAA, first at the Ontario Winter Games, and capped off the year with a Canadian Cadet Championship. While Thomas was quickly becoming a big name wrestler, his older brother Torben was doing his share of winning as well. More importantly, Torben became established as a strong team captain, setting the standard for team leadership that remains to this day.

By the spring of 1986, the Spartan wrestling team had grown from a rag tag collection of 10 bodies to 40 + strong. It was this group that traveled to White Oaks where they were expected to challenge but not upset perennial champions, Georgetown. The Spartans began a new Halton tradition by winning their first ever Halton title by over 40 points. Dave Makay, Rich Harrison, Thomas Jensen, Tom Woodward, Clyde Whidden, Doug Herron, and Steve Brown were all crowned champions as ECD won a total of 16 medals.

It wasn't until 1987 that Drury made their mark at the OFSAA level. Joining the newly formed Golden Horseshoe Athletic Conference (GHAC), ECD won the first GHAC team title, with Paul Carles, Thomas Jensen, Tom Woodward and Steve Brown all winning gold. ECD sent 9 wrestlers to OFSAA and placed 9th overall. Although it would be two years before Drury earned their first OFSAA medal, a bronze by Thomas Jensen, and several more until Colin Widdis won the first gold in 1994. 1987 Marked the year that E.C. Drury High School became established as one of Ontario's elite wrestling teams.

The winning tradition has never ended. By 1997 Drury claimed 10 Halton titles, 5 GHAC championships, countless team titles, individual gold's, and a large collection of OAWA and National medals. In 1994 not only did the Spartans enjoy Widdis' OFSAA championship, but Chris Denich (National Champ) put Drury on the international map by placing 6th at the World Cadet Championships in Chicago. Year after year the torch was passed on from the Jensen brothers, Bates, Cooley and Woodward to Wilson, then to Spence, Pickett and Widdis, to Vanellis and Price to Denich, Mills, Cavallo and Petherick. By then it was time for Justin Billingham and Blair Bealieu to pick up where the others left off and as the 1997 leaders enjoyed their final days, Kevin Heffron, John McCart and Chad Merritt proudly wore provincial Cadet medals around their necks as they prepared to accept the torch for the new generation. Not only would they continue the winning tradition, they would lead Drury to new heights never before imagined.

The 1997-98 season began with limited expectations as a Milton Champion article described the current status of the team as facing the biggest loss to graduation in Drury history. Undaunted by the loss of so much experience, the next generation fought determined, once again winning the "Triple Crown" Twelve Spartans made the trek to Brampton for OFSAA '98, "The Battle in the Barn". It was here, in early March of '98 that Drury truly arrived. As the Champion would later declare, "so much for a rebuilding year". Walking into "the barn" for Day 2, the Spartan wrestlers were both shocked and elated to find they were sitting in 2nd place. Led by silvers by Blair Beaulieu and Kevin Heffron plus a 4th by Andy Wadeson and 5th by John McCart, ECD maintained their position behind Brampton Centennial, winning the 1st OFSAA team medal in history.

The 98-99 season was one of great expectations. The Champion highlighted the preseason story with a picture of 4 early season gold medallists under the caption "Men on a Mission". No longer intimidated by OFSAA, Drury for the first time dared to dream the dream. Nothing comes easy though and this was certainly the case as the team woke up on a cold January morning to find out they no longer had a wrestling room. The "great fire of ‘98" destroyed the Drury gym and sent the team scrambling for practice venues with just over a month to Haltons. It was here that the team took on the motto "Overcoming Adversity". And overcome they did. Once again rolling through Haltons and GHAC despite training difficulties, the team went to OFSAA and gave it their best shot. Not quite ready for the top prize, they none-the-less settled for their 2nd consecutive team silver on the strength of medals by Heffron, Chad Merritt and Justin Billingham as well as 4th place finishes by Blair Beaulieu and John McCart.

The season never really ended as the returnees set their sights on OFSAA 2000 and began that quest the day the season ended. The team established their dominance in tournament after tournament. Relentless training in a new wrestling room shrouded with history drove Drury towards their destiny. On March 3, 2000, a Champion photo of captains McCart, Merritt, Heffron and Gallinger and coach Jaroslawski was titled "Ready, Willing and Able". And ready they were. A day later in Woodstock the impossible dream was realized. First Mike Devries earned Drury's 2nd OFSAA gold, followed shortly by a bronze for John McCart, 5th and 6th place finished by Rob Petherick and Sean Burnham, and gold by Drury's 1984 team mascot, Chad Merritt. Then those two words, the team will never forget… in 2nd place with 120 points… Brampton Centennial. The roar of team members, alumni and fans drowned out the rest but there was no doubt, Drury was the OFSAA Champions (See Rory McDonell's OFSAA 2000 memoirs for an idea of what the moment was all about).

After 20 years of climbing the ladder, Drury finally made it to the top, a place they would be determined to stay for as they could. In 2001 it was Chris Holmes, Sean Burnham, Andy Wadeson, Rory McDonell and the Baxter brothers who highlighted the "Back to Back" title in Guelph. In 2002, in Thunder Bay, Matt Knock, the Baxters, Jesse Ronan and Tyler Saliba led the team to a record tying OFSAA 3 – peat. Next came Sarnia where Drury accomplished what no other team has ever done before, the coveted 4 – peat. Jesse Ronan's silver, top 5 finishes by Kevin Tyrer, Rob Petherick, Gary Ferrier and Allan Moffatt plus a title clincher bronze medal by Matt Knock in the final match of the tournament earned Drury their place in history.

Going into 2004, Drury remains a strong contender. At some point this unparalled run of success must come to and end, but now that the team knows how to win they will never fade away. The winning tradition is sure to continue. 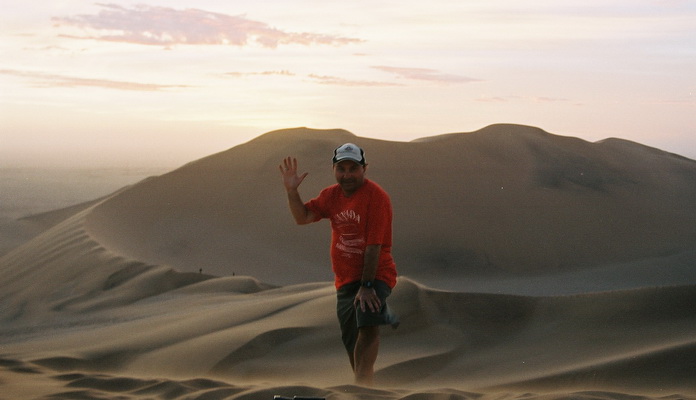 No one connected to E. C. Drury High School is foolhardy enough to believe they've seen the last of Larry Jaroslawski.

Nevertheless, the wrestling guru's official ties to the perennial powerhouse program are now over — with his retirement from teaching coming early this spring and a sure-to-be-well-attended retirement party slated for Saturday (6 p. m. to 2 a. m. in school's sports building).

I've never actually attended a teacher's/coach's retirement before, but to miss out on Jaroslawski's would just seem wrong.

After all, my memories of the man affectionately known as Mooch go back long before I even considered sports reporting, much less started covering his team's rise to provincial prominence.

As the friend of a few of his early grapplers in the mid-to-late ‘80s, I still vividly recall how Thomas Jensen's Canadian cadet title victory served as a championship catalyst for the Spartans.

Suddenly wrestling became the thing to do at Drury, and enrollment and success quickly grew.

With a ton of expertise and unrivaled dedication over the past 25-plus years at Drury, Jaroslawski can now look back on a career that trumps not only his wrestling peers, but most other coaches in pretty much any given sport across the region or province.

With an unprecedented 12 straight team medals at OFSAA — including five consecutive golds — it's no wonder E. C. graduates have generally made a smooth transition to the university ranks.

When it comes to fundamentals, they're head and shoulders above the majority of the pack. Of course Jaroslawski's establishment of a strong elementary-level feeder system has a lot to do with that as well.

And Drury's success shouldn't be measured solely by its medal count.

It's hard to imagine that any sport has galvanized a school community the way wrestling has at E. C.

In fact one of Jaroslawski's former wrestlers — Simon Vanellis — has even gone on to become one of his successors, while year after year team alumni come out in packs to offer support to the current roster.

Bottom line, Jaroslawski is the architect of one of the biggest sporting dynasties in Milton's history, and deserves a spirited send-off. Well, sort of — since none of us expect him to fade completely out of the picture.

Here's to you, Mooch!